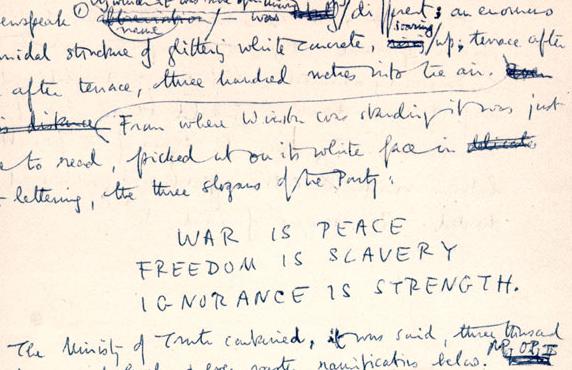 The original manuscript for Orwell’s 1984. Image courtesy of netcharles.com

I’m rather enjoying George Orwell’s 1984 at the moment. Loads of stuff to ponder on including this rather wonderful passage that seems tailor made for my argument that quantitative research in marketing represents little more than quantitative speculation. Is appears in the section where Winston Smith is fabricating the Ministry of Plenty’s figures so that their forecasts rather better resemble reality.

But actually, he thought as he adjusted the Ministry of Plenty’s figures, it was not even a forgery. It was merely the substitution of one piece of nonsense for another. Most of the material you were dealing with had no connection with anything in the real world, not even the kind of connection contained in a direct lie.

Bear that in mind in your next quantitative speculation debrief.

Rather more profound, though, is an other quote, one with direct relevance to our day to day business.

Orthodoxy means not thinking – not needing to think. Orthodoxy is unconsciousness

Let’s try to remain in a state of consciousness as we develop our strategies and ideas rather than zoning out and settling for the orthodox and unthinking.

Perhaps we might all carry a bottle of smelling salts that we waft under each others’ noses whenever we get tempted to write strategies like ‘the beer with a clean crisp taste’ or ‘the family saloon that thinks it is a sports car’.

8 Replies to “Orwell’s message to plannerkind”