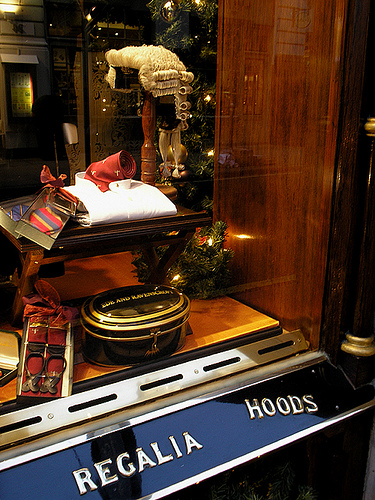 Ede and Ravenscroft of Chancery Lane, specialists in gowns, wigs and other legal paraphernalia. Photo courtesy of avtost

People still seem very keen to join advertising agencies, and in particular to become planners. And why not its a brilliant job.

One of the key questions is always how to get in. Since on the outside this can seem an utterly impenetrable industry.

And just to save anyone the trouble of traipsing to Clerkenwell for a nasty cup of coffee to ask me in person, the truth is I don’t know.

There isn’t a formal way in because there are no qualifications whatsoever that you need to have under your belt to do this job.

And that is because it is a trade and not a profession.

For sure, loads of people wish that advertising was a profession and many have tried to give it a veneer of mock professionalism over the years but this is to miss the point about what we do and what makes us good at doing it.
It is perfectly possible to go off and get a marketing or advertising degree, diploma or certificate. However, if you are trying to get a job you would be ill advised to follow this route. British advertising has an almost unique distaste for vocational qualifications (although an applied Masters or MBA as a second degree is perfectly acceptable).
I’ve never been entirely sure about why this is. I used to think it was the result of a class system that believes vocational rather than academic education is somehow improper – like wearing brown shoes with a black suit, passing the port to the right or bestiality.
But I think the real answer is rather less flippant.
Qualifications are a pretence that this is a profession.
“A profession is an occupation that requires extensive training and the study and mastery of specialised knowledge and usually has a professional association, ethical code and process of certification or licensing”. So says Wikipedia.
And that doesn’t sound much like advertising to me. Trade bodies do exist but membership is not compulsory in order to pratice (unlike the British Medical Association for example) and being good at this business patently does not require “extensive training and the study and mastery of specialised knowledge”.
And why? Well for the same reason that it is possible to be too clever to work in advertising – because what we do is quite literally ‘not brain surgery’. The communications landscape gets ever more complex but our jobs remain very simple, to work out how to sell things to other human beings. At its heart this is about simple human interaction and you don’t need to go to college to understand how to do that.
Of course many people in the business did go to college but not to study marketing or advertising (my degree is in Geography). Academic qualifications are valued because they teach the basic skills of understanding, analysing and presenting information that is required in any ‘knowledge’ industry. And they also indicate an eclectic range of interests and intellectual stimulation that are the raw materials we draw upon when thinking about the world.
The reality is that like the trades and guilds of old the real way to get into and make a success of this business is to apprentice yourself to a master practitioner.
Most of people I really admire in advertising and specifically in planning, point to a master practitioner under which they trained. It is one of the reasons that BMP has had a far more dominant influence on the discipline than JWT (the co-founders of planning under Stephen King). Throughout its history BMP’s planning apprentices have gone out into the world and in turn shaped their own apprentices.
I myself learned from Jon Leach, who was an apprentice of Adam Lury who trained at BMP.
In fact everything worthwhile I have learned has been at the feet of a master practitioner. Adrian Vickers taught me to take ‘yes’ as an answer from clients. Peter Mead instilled in me a respect for consumers. Michale Baulk taught me the business value of what we do and that if you write on a slide read what is on the slide. Adam Lury taught me that advertising was too powerful not care about it. Steve Henry taught me to be restless and uncompromising. And Jon Leach taught me how to make my mind do the weird shit that I need it to do to create interesting ideas.
Learning on the job is the only way to learn this trade. And the best training is with someone that you admire and want to emulate. Following them, picking up their approach, using their experience and then figuring out your own way of doing things in due course.
This is why there is no simple answer to the question about how to get into the industry and this is the real reason why formal marketing or advertising qualifications are not taken seriously.
No matter how much some people wish this a was a profession like being a barrister or doctor, we actually have more in common with bricklayers, furniture makers, glassblowers or potters – people who become experts through practicing their trade. This is the reason why we talk about learning your craft skills after all.
So let’s stop all this nonsense about advertising being a profession and recognise, no matter how much your tutor at Oxford might loathe it, that you are in trade.
And if you want to get into the business – apprentice yourself to someone you admire by persuading them that you alone should be their prodigy. Bloody hard to pull off, bloody brilliant if you can.

27 Replies to “Advertising is not a profession”