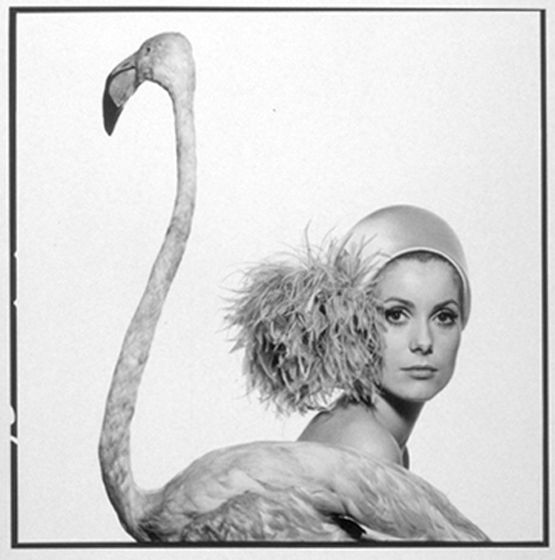 And how can Catherine Deneuve, a flamingo and a bottle of scent help us understand the answer? Ok I lied about the flamingo.
Image from the V&A

One question has bugged me for a very long time.
Why are creative ideas a good idea?
We all seem to believe that they are important. From a very early stage in our careers we are taught that creative work with an idea in it is better than creative work without an idea. More than that, perhaps the most pejorative thing you can say about a piece of creative work is that there is no idea in it.
Indeed many of us first became interested in advertising as a career because we saw creative ideas that we loved and wanted to be a part of creating. Obviously this was after we got the train driver thing out of our system.
But why are creative ideas so dear to our hearts? Why do we think that they work? Why do we think that they are a good idea?
Perhaps you think I have gone completely insane. Perhaps to you it is self-evident why the industry produces so much blood, sweat and tears creating great ideas. It’s just that in nearly 20 years in the business no one has ever answered this question to my satisfaction.
And it seems that it is no use asking creatives – they certainly don’t seem to know. The only thing creatives have ever been able to tell me is good creative ideas ‘cut through’ better. Whatever that means.
Well I had put this conundrum right to the back of my mind when Dave O’Hanlon, the legendary Tango planner who ran the account in the ‘90s with a semiotic rod of iron, reminded me of a woman called Judith Williamson.
In the late 1970s Judith wrote a book called ‘Decoding Advertisements’ in which she explored the way that ads communicate, the way that they create meaning.
You’d have thought this was an essential read for anyone in the planning community but it is quite possible that Dave and I are the only planners working in the UK that have ever read it. And I can absolutely guarantee that Dave is the only planner that totally understands it.
Now Judith is no fan of our industry. However, as is the case with most left leaning analyses of capitalism, she offers us a genuinely fresh perspective on this business in her quest to unpick our dark art. And re-reading her book I realised that it holds the answer to my question.
The role of the creative idea in advertisements is very simple. It is to transfer meaning from something we understand well to something that we understand less well or need reminding about.
Creative ideas transfer meaning. That is their role and that is why they are important.
Or to be more precise, creative ideas allow the consumer to transfer meaning since the idea itself is quite passive. The creative team may have suggested a meaning they wish to be transferred but this can only happen if the reader is a willing participant in the process and understands the comparison that is to be made.
Which brings us to Catherine Deneuve. 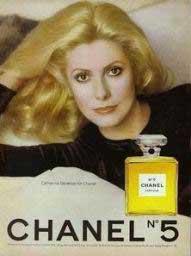 Williamson uses many examples to illustrate her theory but the most referenced example is an advertisement for Chanel No.5 featuring that icon of French style and sexy sophistication Catherine Deneuve.
She uses this ad to show the way in which the meaning of Catherine Deneuve is successfully transferred on to Chanel No.5 and in doing so helps us get our heads around those semiotic cornerstones – signifier, signified and referent system. Deneuve is the signifier, French sophistication is the signified and everything we understand about Catherine Deneuve is the referent system.
Incidentally this is why, though we strive daily for originality, there is a basic truth that genuine originality isn’t much use in advertising. Every ad needs to refer to something that we already understand in order to take that meaning and apply it to the product or service we are selling.
I find the Chanel example doubly interesting because of the recent W&K press ad for Honda in which the Chanel bottle itself became the signifier, was filled with oil and sported a Honda logo in the place of the Chanel label. I figure Williamson would also be amused by the constant recycling of meaning that that advertising delights in.
All well and good, however, even the least creatively minded of us would hardly consider the Chanel ad to be a paragon of advertising virtue. It’s simply not very ‘good’.
And that’s the question I now want to address. Why is a ‘good’ creative idea better than a ‘weak’ one?
If the role of a creative idea is to transfer meaning then by that token a good creative idea must be more successful in achieving this than a poor one. This seems to me to be important since it suggests that the quality of a creative idea is not a subjective issue, nor is a powerful idea nice to have. A good creative idea works better.
I think good creative ideas work better to transfer meaning in five essential ways:
1) Speed – The attention of the consumer and the expense of the media we use demand that meaning be successfully transferred as fast as is possible from the signifier to the subject of the ad. Good creative ideas are better at this because the link is established faster. Campaign recently ran an article on creativity in the Middle East and helped illustrate this with an ad for Sony flat screen TVs in which a ‘new’ flash is held to the front of the screen by a single paper clip. In an instant everything we understand about the thickness of the paper the clip usually holds together is transferred to the TV.
2) Communication – Good creative ideas work better because of the richness of the data that is transferred in the process of consuming the ad. The more powerful the signifier that is being used the richer and more complex the meaning can be. The new print campaign for the Daily Telegraph offers an example of rich meaning. In this work the heads of the Telegraph’s sports writers are superimposed on to illustrations of great writers in the English language like Dickens and Shakespeare. In doing this an incredibly rich amount of meaning is transferred from the illustrations to the Daily Telegraph and the prowess of its sports writers.
3) Identification – Creative ideas ‘hail’ the audience. Good ideas not only make it clear that we are being called upon to create and transfer the meaning of the ad but they also help ensure that we identify with the product or brand concerned by using a referent system that we understand and in understanding declare ourselves part of. The Daily Telegraph ads use a referent system that Daily Telegraph readers relate to and in relating to reinforce their identification with its meaning and with the Telegraph as a brand.
4) Memorability – It is clear that an ad that we enjoy becomes potentially more memorable, though there is no guarantee that what is remembered is the important bit. Hence executional memorability is problematic. But a good creative idea becomes memorable for a different reason. Because the consumer creates the meaning and is active in its transfer they become involved in the ad. This is what Williamson describes as hermeneutics (the theory of interpretation) but we might call ‘getting it’. We find solving the puzzle on offer – literally why and in what way the signifier and the object are linked – rewarding. This enjoyment cements the idea and its system of meaning into our minds. The Economist campaign is a very good if increasingly tired example of this at work.
5) Fidelity – in an age where markets are conversations and brand success is dependent on consumer-to-consumer communication the accuracy or fidelity of this communication is critical. Good creative ideas get passed from consumer more accurately and with more of the intended meaning intact. Consider the way in which you would have talked about the Honda Diesel campaign and the fidelity with which you would have passed on the intended message that Honda hated Diesel engines so much they completely changed the way they were made. And contrast this with the way in which you talked about the Sony Bravia ad that is executionally outstanding but arguably a referent system short of a great creative idea.
The ability to transfer meaning and do so in ways that increase the speed of transfer, richness of communication, level of brand identification, and the memorability and fidelity of the message is what makes good ideas a good idea.
Fight for good ideas and defend them against the drift that so often sees them neutered and impotent
Oh and read “Decoding Advertisements’ by Judith Williamson. Here is a link.

14 Replies to “Why are creative ideas a good idea?”