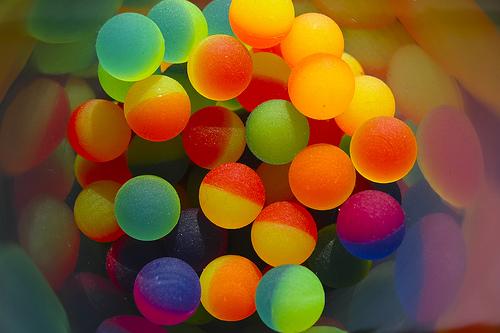 Photo courtesy of
Balls is clearly much less of a campaign than Honda’s ‘Power of Dreams’ but as one off TV commericals go really rather good. And it has a sequel in post at the moment involving semtex and paint that is quite possibly the most eagerly anticipated piece of work in advertising history – you can even take an rss feed from bravia-advert.com to keep you updated on its progress.
At one level of course I despair. As a planner I much prefer the previous Fallon campaign for Sony because of the tip top strategy -‘the final component in every Sony is you’ – we even gave it an APG award. This is real ‘role for the brand in people’s lives stuff’.
And in terms of rational communication ‘balls’ is extremely lightweight – completely hiding Bravia’s HD light under a generic ‘the picture is really good’ bushell.
And yet, and yet!
While the market is flooded with HD communications this is the one ad that stands out, that people love, that people talk about and that maybe just maybe is starting to work.
And as we know rational communication is becoming a bit of a liability in advertising. Robert Heath has done some research on the way in which Bravia works that he incorporated into an Admap article in August on emotional persuasion.
His CEP test looks at both the cognitive and emotional power of advertisng and suggests that, while Bravia is a poor performer rationally, its emotive power is very strong and that this maps onto high favourability ratings for the Sony brand. And boy oh boy if there is one thing Sony needs right now its favourability as the advent of flat screens has shaken up the TV brand landscape.
Lets face it. If Bravia balls worked it would be a good thing for all of us. Proof of the enduring power of the brand film and the potency of creativity and craft.
Ladies and Gentlemen lets go to work.
Oh here is the ad:

And here is a film about the making of the ad:

And here is the sequel:

40 Replies to “The Advocate – October”