Hurtling down the Brand Catwalk this week is that small but perfectly formed premium gin, Hendrick’s and its one-brand assualt on, what Malcolm Gluck famously called, the Daily Telegraph Obituaries column image of gin and gin drinkers.

So heres what we know.
Gin is big but its not exactly the flavour of the moment. Sources disagree as to whether gin is in absolute decline or holding its own. But lets face facts, in the growth stakes vodka is kicking seven types of shit out of gin.
Undaunted, decade after decade the big boys of the Gin world try to revitalise the drink’s image, in the blind hope that one more throw of the creative dice will see gin back on the path to growth. After all gin is a white spirit which is precisely what younger consumers want to drink.
Then along comes Hendrick’s (admittedly in the company of one or two other premium gins like Tanqueray Ten) and shows them how to do it properly.
Start with the distilling expertise and heritage of William Grant (one of the few family owned independent distillers in Scotland) and wonderfully pure Scottish water. This will ensure that the resulting product has bags of prized authenticity, important to any successful brand and essential to spirits.
And then turn everything else you belive to be right and proper about gin on its head.
Don’t bother joining the whittering match about juniper berries (every Tom, Dick and Gordon has those) but bung in cucumber and rose petals. Bonkers ingredients they may be but they are also highly evocative of English summer afternoons spent reading slim volumes of poetry and playing croquet in the grounds of your uncle’s drafty country pile. This will reinforce refreshment cues and give you a distinctive way to serve the drink – over ice with tonic and slice of cucumber rather than lemon.
Stop brushing the ‘mother’s ruin’ heritage under the shag pile but embrace it with the ferocity of a dog on heat. Wallow in the debauched world of 18th century London whose 17,000 gin houses were rapidly sending the capital to the dogs. In particular design your bottle to look like something straight out of Hogarth’s Gin Lane. This will give you stand out on the back bar, curiosity value and a way in to a wonderfully rich visual language.
Wrap this counter category approach up in a personality that revels in the unusualness of the product – maybe publishing your own newspaper, holding an annual Chap Olympiad, encouraging bartenders to play croquet or providing rushed commuters with momentary relief.
And your away to the races.
Well this is exactly what William Grant have done with their Hendrick’s gin brand abetted by Gyro, their Philadelphia based creative agency, and Propeller their digital agency. 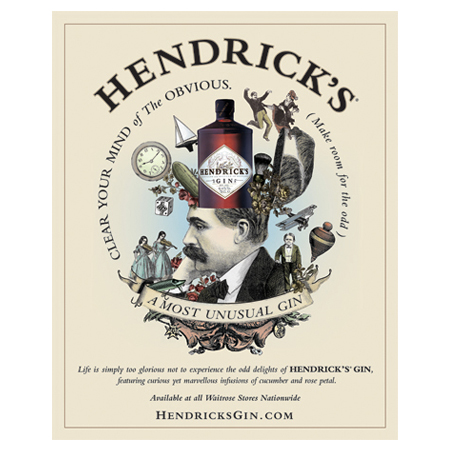 Hendrick’s distinctive visual language
It is almost a faultless case study in the way to create and launch a brand these days.
Authenticity is king (not delivered by longevity but expertise) and product performance is absolutely paramount. But then the brand idea (the idea behind the brand) comes into play, guiding and driving evey facet of the brand from packaging to sampling and the online presence to sampling.
Hendrick’s is now in its seventh year having launched in the US in 2000 and the UK in 2003. It is also in distribution in 21 other countries.
And it is succesful, hugely successful, delivering growth rates (65% year on year) that make even vodka look sluggish.
Sure this brand is never going challenge Gordons but that is not the point. It provides William Grant with a potent white spirits brand and delivers up a small but fanatical and fanatically engaged audience prepared to pay for a better drink and a better idea.
Anyone joining me at the Chap Olympiad?

8 Replies to “The Brand Catwalk – Hendrick’s”