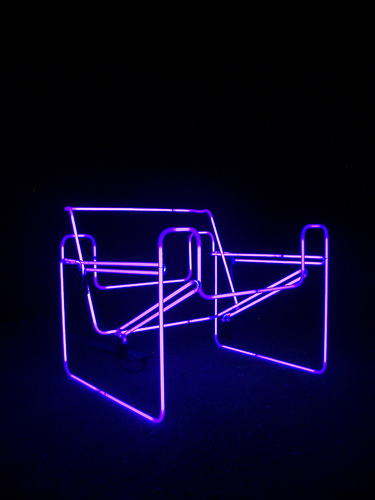 The Wassily chair, designed by Marcel Breuer in 1925 – anyone remember any ads made that year? Image courtesy of Alex Terzich.

My first love is design.

I got into advertising by accident. I was all set to become an industrial designer, when irresistable lure of Geography took me away from the path of righteousness (which is another story).

And a love of design is handy these days since it is looming ever larger in the lives of advertising people.

For one thing identity is no longer content to sit in the bottom right hand corner of the ads but demands to play a bigger role – sometimes with brilliant results (the Guardian) and sometimes in less edifying form (O2). We have to recognise that identity rich advertising is here to stay and that ads that ignore identity feel somehow distant from the brand.

We are also starting to see the value of design in-house
not just to dress up weak ideas but as a distinct practice allowing us to extend our role within Client businesses.

Finally I think we all admire the way that designers make stuff at every stage of the process when so often our ideas exist simply as words on paper right down to the point of production. Designers know that producing stuff means that they win clients over on a very emotional level.

But anyone in advertising or design that has worked closely with the other will know that a truely collaborative relationship is not easy.

Part of the problem is that, just like the relatioship between the US and UK, advertising and design are separated by a common language.

I have felt this separation most acutely working with identity agencies but even working with in-house designers can be a challenge when the two of you think you are in agreement but mean something totally different.
So I thought I’d record the differences (albeit from an advertising perspective) in order that an understanding of them will promote fraternal love and co-operation.
1) When advertising people talk about a brand we mean the set of associations that exist in peoples minds. While designers clearly think this is important for them the brand is much more about the mark or identity. Our brand is nebulous theirs is concrete – it’s what the identity looks like and the values that it embodies.
2) As a result advertising people see themselves as shepherds marshaling brand associations over time, whereas designers prefer to see themselves as police laying down the law of the brand and then enforcing it, often using their favourite tool – the Spirit Book.
3) Advertising people prize originality above any other value (we are obsessed with things that have never been done before regardless of whether this is relevant to success) while design people prize control over any other value (the extent to which they can control every manifestation of their creation). That’s why they like Spirit Books so much.
4) So when it comes to integration advertising people try to encourage strategic coherence across all channels and activities whereas design people like to see executional consistency.
5) Designers often create things that are permanent manifestations of the brand – the packaging, the retail facia, the staff uniforms and of course the brand’s physical representation in the form of a mark. As a result they are very conscious that these things need to last and rise above trends and fads. Advertising people produce things that are instantly disposable, the temporary manifestations of the brand so they like to play with cultural currency and at best to contribute to it. Perhaps this is one reason why advertising people like things being funny and designers do not.
6) Advertising people burn up ferociously expensive media this makes them very conscious of the need for it to deliver results. Design people tend to use relatively cheap media in comparison. It is costly to re-badge every retail outlet but that investment will last a decade (unless you are Abbey). Indeed many things that the designer controls have to be produced anyway – like packaging or stationary, bags or uniforms. This leads to a fundamental difference in the urgency with which activity is supposed to work and often makes design more commercially passive when advertising seeks to be more commercially aggressive.
7) Having said that, design people are often more focused on solving problems (especially industrial designers) since their training is in finding and solving real problems in people’s lives or with the status quo. This means that they are often asked to and can think more fundamentally about, how it should be solved. Take the problem of left handed people being unable to use a pair of scissors, advertising people would approach this by telling left handed people how to use the existing scissors better whereas design people would create a new pair of scissors.
8) And finally our ideas of quality are based on different criteria. The concept of Good Design is absolute, in others words there is a notion of good design and poor design and while design genius can not be taught, good design can – there are real principles upon which it is based. There is no such absolute concept of good advertising and a pretence that there is often leads to commercially irrelevant decision making. Good advertising is whatever works for this audience today, good design is eternal. This is one of the reasons that we still sit on chairs designed by mid-Century legends (like Eames or Breuer) but laugh at advertising from the same era.
Neither camp is right or wrong we simply come from different traditions that value different things in the work we produce and from the people that produce it. And the more we understand and appreciate this the better our attempts at collaboration will be.

17 Replies to “Separated by a common language”