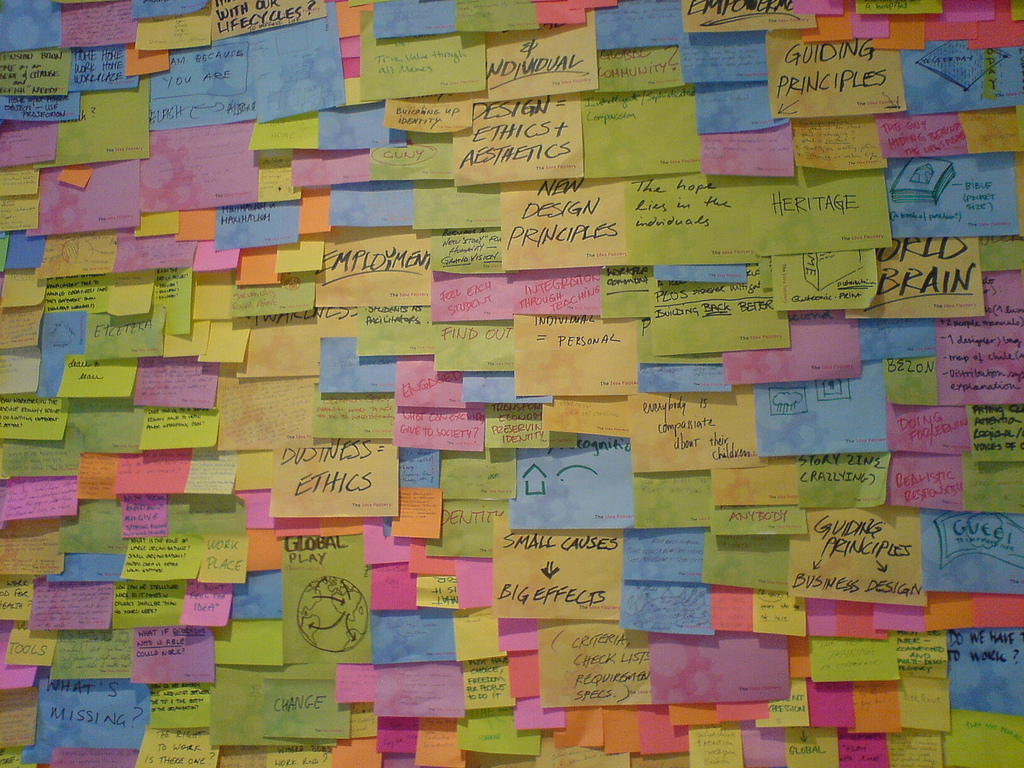 I hate running them, I hate contributing to them and I hate using them to solve problems.

They waste huge amounts of time and talent and they are no fucking good at delivering decent ideas.

And so six months ago I cleansed my professional life of this trojan horse of mediocrity, favouring aggregated individual working or two person thinking sessions.

I suggest it’s time you gave them the boot too.

The idea of the brainstorm was developed in the 1930s by Alex Faickney Osborne, the O in BBDO (which he founded in 1919 with his mates Batten, Barton and Durstine) and popularised in a book he wrote on the subject called Applied Imagination.
Osborne believed that when creating ideas quantity breeds quality – that if you can generate enough ideas somewhere in all the swill will be gold dust.
And so that’s what he built his brainstorming technique to do – deliver quantity over quality. Kind of like a Starbucks for creative thinking, you know once in a while they make a decent cup of coffee. Brainstormers are supposed to focus on quantity, not criticise other people’s ideas, be as ‘wild’ as they want and to combine and improve existing ideas.
These rules are so pervasive in contemporary business that even the cretins on The Apprentice seem to have learned them. And it is these rules that are at the heart of the ghastliness of the brainstorm experience . An experience in which too many people, with little ultimate responsibility for the quality of the outcome whitter on for far too long to the increasing frustration of the problem owner. Frustration manifestly worsened by the cult of facilitation.
A facilitators main task is to ensure that ‘everyone goes home with a balloon’ after a brainstorm – that they all feel that their pointless lives have been made somehow better by this semi cathartic experience and by the lovely little warm up games that they all played. Not to mention that they all got to vote on the most simplistic and incompetent ideas with a little stash of post it notes like some kind of mutant pin the tail on the donkey game. Facilitators like pariticipants to have a nice time more than they like delivering actionable output.
But the thing that really pisses me off about this whole technique is that it brings an unwelcome democracy into the process of idea generation. Democracy is great as a way of ensuring that the will of the people is brought to bear in governing of their lives. But it pretty much ensures that blandness is the output we most readily associate with the brainstorm. In particular democracy leads to production blocking which is the loss of great ideas while people are waiting for their turn or having to listen to the irrelevant ramblings of other participants. And if that were not bad enough it ensures that the more polarising and interesting ideas are lost at the evaluation stage as everyone showers the flip chart with their ‘stickies’ endorsing the familiar and feasible.
And there is no evidence they actually work beyond increasing morale, team building and other such airy fairy shenanigans. Productivity loss in an inherent part of the brainstorm approach (Mullen, Johnson and Salas, 1991; Diehl and Strobe, 1987) which results from evaluation apprehension, social loafing and the production blocking I mentioned above. Much of this research shows that brainstorms are infact less effective than individuals working independently.
for my money the optimum number of people for an idea generation session is two with no facilitator hanging on. Two people that have a vested interest in the quality of the outcome and can switch seemlessly between divergent and convergent thinking until they get to the right idea which they both then build upon.
It is one of the reasons that Bernbach was a genius in putting art directors and copywriters together and a reason that startegists should also be paired, or paired with individual creatives.
And if you need any more convincing that brainstorms (and their euphomistic offspring like ‘thought showers’) are shit think about how easy it was to get people into the room last time you ran one. The only endvour people want to be involved in less is a four hour powerpoint presentation on the new phone system and they will make up the most outlandish excuses not to spend 3 hours in an overheated room with some idiot prancing around infront of a Nobo board for no apparant reason.
Sure have a brainstorm if you want to do a bit of team building and you don’t really care about the outcome.
If not pledge today that you will have nothing to do with the bastard offspring of the advertising industry. Refuse to run them, refuse to contribute to them and never ever find yourself voting on lacklustre ideas with post it notes again.

79 Replies to “The brainstorm – a trojan horse of mediocrity”