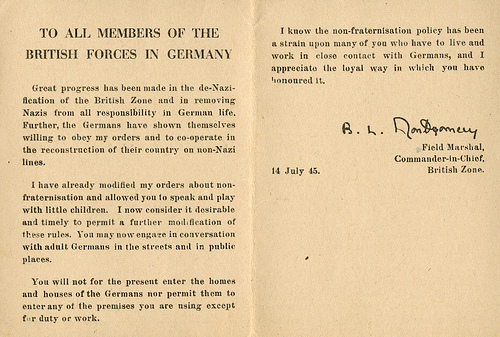 Field Marshal Montgomery’s stern letter to the chaps reminding them against fraternisation – except with little children of course.

As ‘Russell Davies lite’ I often get to fill in when the great man is otherwise engaged – weddings, after dinner speeches, visits of foreign dignatories, that kind of thing.

And so I did some holiday cover on his Campaign Magazine column recently. The first was a tongue in cheek look at the way social media is helping to build bridges within the marketing community – between disciplines and between practitioners in different countries.

There can be few industries outside technology that have taken to the many tools and applications of the social media revolution with the alacrity of advertising.
Adland is blogging, twittering, sharing ads on Youtube, closing down MySpace accounts and opening them up in Facebook with an enthusiasm we used to reserve for selling fags and fatty food. And I’m more than a little worried.
Not about the usual Chief Executive whinge about how their people find the time to maintain an online life when that’s the only kind of life that their jobs will allow.
Nor the planning luminary’s concern that being able to look the answer up on the internet, rather than commissioning reams of insight-free consumer research, is dumbing down the serious intellectual business of repositioning yellow fats.
No. What worries me is that all this online fraternisation it is making us like each other too much. And possibly, heaven forefend, respect each other. This simply will not do.
Many industries are characterised by camaraderie and respect between colleagues in competitive firms. But advertising is not one of them.
To win in this hideously competitive business you have to have the killer instinct, a belief that for you and your agency to succeed others have to fail. Well I don’t know about you but I find it a damn sight harder to stick the knife into another agency’s new business record if I have been Twittering about my bowel movements with their head of planning the night before.
Our whole business thrives on the idea that there are only two types of people and agencies in advertising – brilliant and crap. With the inevitable assumption that we are all brilliant and they are all crap.
That kind of delusion can only be maintained if you have no idea who anyone is outside your agency and still less like any of them. That’s why British and German generals took such a dim view of the impromptu football matches that took place between the trenches of Northern France.
Sure, we have always allowed some fraternisation amongst the upper echelons under strictly controlled conditions and providing it doesn’t get back to the lower ranks. Usually over lunches at the IPA or a sweet sherry at the A-list party.
But everyone in adland is now doing this social media stuff – chattering away, building relationships, sharing work, and swapping ideas with no respect for traditional agency rivalries or tribal loyalties. To top it all this new spirit of chumminess is bringing people together across disciplines – ad people with direct people, creative people with media people, analogue people with digital people. And believe it or not some are even getting buddy-buddy with foreigners.
That kind of carry on is the way revolutions start.

8 Replies to “Russell Davies is on holiday”