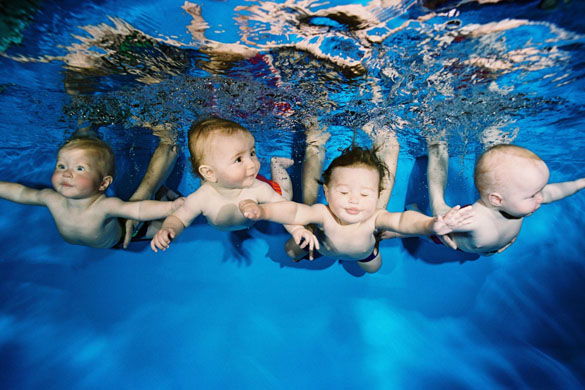 Support for the acquatic ape theory? Image courtesy of Chweetletchu

And here are the afternoon’s highlights.

Rebecca Saxe – Cognitive Neuroscientist – Talked about the way in which we understand other people’s minds, the responsibility of a special part of the brain (a discovery she herself made as a student). She also talked about the ability to alter people’s moral judgements by stimulating this part of the brain, an application that the Pentagon is apparently reasonably interested in.
Henry Markham – Cotex Visionary – Henry maintains that our ability to understand the human brain is the next step in the evolution of humanity and he is building a software simulation of the brain to help us do this – his Blue Brain project.
David Deutsch – Quantum Theorist – Criticised the belief in empiricism at the heart of much science, believing that scientific knowledge is tested by empiricism not derived from it, after all the greatest theories of explanation cannot be seen. For him the route to truth in science is through good explanations and this means hard to vary explanations. My favourite quote from David is “Our best theories are not only tuer than common sense, they make more sense than common sense”.
Elaine Morgan – Aquatic Ape Theorist – At the age of 90 Elaine is the oldest speaker ever to grace a TED stage. A scientific maverick she continues to try and win support from a hostile community for the idea that Mankind is descended from aquatic apes and not apes that descended from trees in the Savanna.