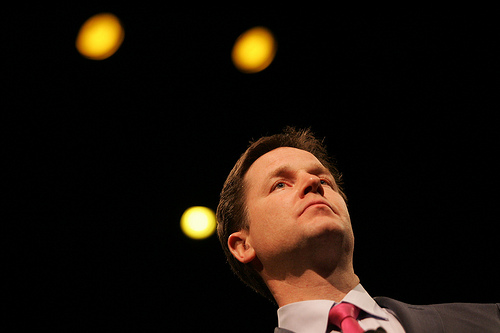 Nick Clegg, the rather pointless Deputy Prime Minister of Britain’s sad little coalition, is in a bit of a pickle at the moment. No one in the country likes him not even Liberal Democrats, his party is about to be annihilated in the local elections on the 5th of May and the referendum on the Alternative Vote system hardly looks like its going to go his way. And this is entirely a situation of his own making, the man would be out of his depth in a paddling pool.

So to hear some sense come out of Cleggy’s mouth was a rather unusual experience. And on one issue he seems to have got it right, his belief that valuable internships in Britain’s best businesses, an essential way into the professional and financial services sectors and not to mention the creative industries, should no longer be allocated on the basis on nepotism rather merit.
While these jobs are often unpaid or paid at marginal rates they are a powerful way to gain work experience, get feet on the bottom rungs of corporate ladders and build relationships inside businesses. Informal though they often are, internships are important for both the young people that take them up and for the organisations that offer them.
Now let’s put to one side the fact that the Cleggmeister himself benefited from a spot of nepotism in order to get his first job in some ghastly financial services organisation. The man has a point and it’s a point that we should take to heart in advertising.
Because the sordid truth about our industry is that the people that tend to hoover up the internships on offer in Adland are the privileged and not the talented. Whether out of fear of the repercussions if they refuse or to garner a little favour, by and large agencies fall over themselves to offer internships to the children of their clients. And if not to them then to equally privileged kids that will have no trouble in finding a job and hardly need this leg up.
There is already a perfectly good way into our business for the privileged and that is the graduate recruitment programmes we run. Even the best and I would include our own summer scholarship programme in this, are only open to graduates and favour those people that have the sort of self belief only the British public school system can instil.
So let’s leave the graduate recruitment programmes to bring in the nice middle class kids from decent universities that have a ‘passion’ for advertising. And let’s free up our internships for kids that come from more diverse and unusual backgrounds, that aren’t necessarily academically outstanding but are damn smart and who may not realise that advertising is their thing or even that there are jobs in creating and making the ads they see everywhere.
And not because we are all do-gooders that want to give a break to less advantaged kids. But for the sole reason that as businesses we depend on difference and diversity to create and shape our ideas, not to mention the fact that our work speaks to the whole of Britain and not to a privileged elite. Add the unavoidable fact that no qualification on earth can provide any indication of how good someone will be at this business and you have a powerful argument for us to follow Nick Clegg’s lead and stop informal and nepotistic internships as he is doing in the civil service. Instead, we should all be creating alliances with schools and youth projects from all over the UK to find and nurture new and more diverse talent for our agencies with the internship as the essential first stage in these new careers.

8 Replies to “No more jobs for the boys and girls”