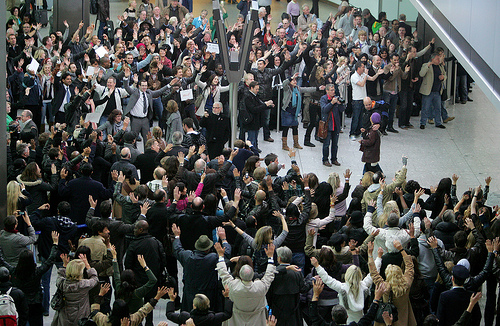 Late last year I was asked to give a talk at the IPA, along with the brilliant Rachel Barrie (from sister agency Fallon), about content driven campaigns. Rachel talked about her experiences working on Gorilla and I talked about our learnings from T-Mobile Dance – both IPA award winners in 2010. It was a rather informal Q&A affair and so there are no charts but in an attempt at prep I scribbled down a few lessons I think that we have learned from our T-Mobile experiences and perhaps more latterly from WeightWatchers. So here they are with the minimum explanation.

1. The more you let go of control the more influence you gain – easy to say but hard to achieve. The long and short is the less it feels like an ad the further it will go
2. Drive mass participation or mass viewership of participation – never settle for marginal reach the only point of doing something is to do it big
3. Emotion is the highest form of participation not clicks or likes
4. The magic of creative development almost always happens in production – this makes the work phenomenally difficult to test
5. Don’t get too poncey about the idea – usually the idea is the hero piece of content and that’s what you should integrate with rather than a broader communications idea. The dance campaign wasn’t about people dancing in public spaces it was about ‘that’ dance.
6. Perfect context magnifies perfect content – you just need to look at the success of T-Mobile’s Royal Wedding to see this in action
7. Excellence wins – excellence of idea and execution, excellence doesn’t come from the crowd
8. Catalyse always – always seed and never forget the power of TV
9. What do you love? – that’s always the best guarantee for success
10.Always ask yourself why anyone will be bothered to share? – bonding, group identity, status or more often, pure wonder