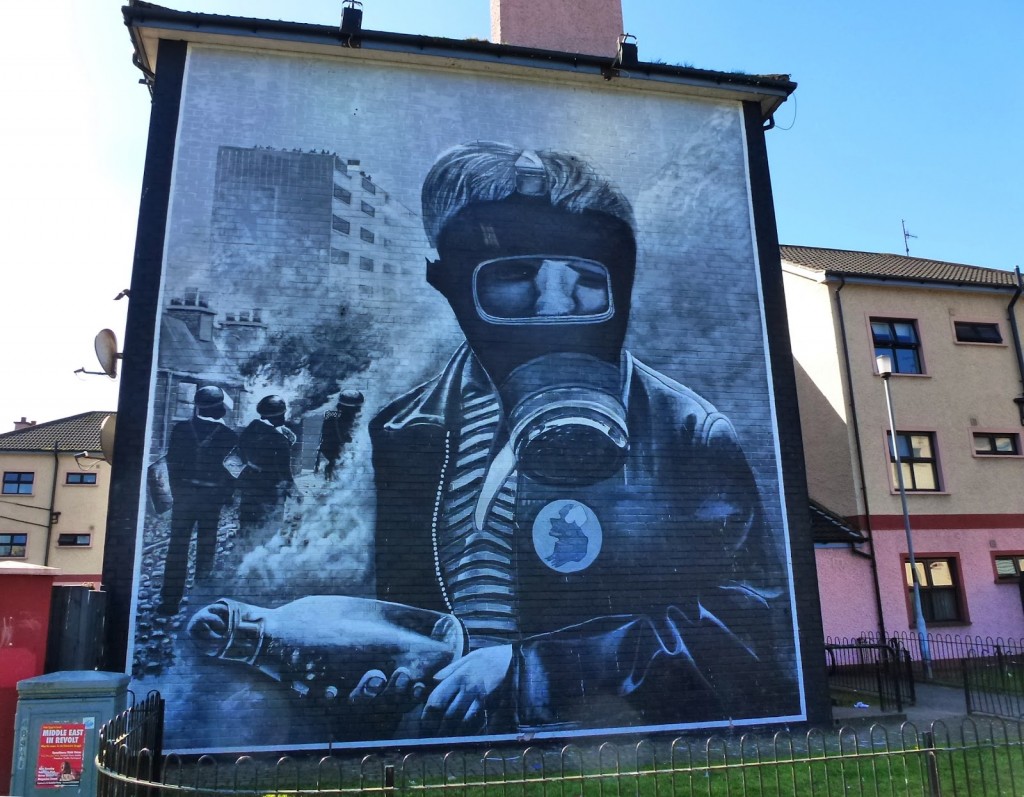 One of the murals depicting the Battle of the Bogside (August 1969) in Derry Londonderry, an enduring records of the conflict in Northern Ireland. Image courtesy of Paddy’s Wagon.

Trust. There can be no rarer and more eagerly sought accolade in the world of brands and businesses right now than the trust of our people and customers.

This is partly because of the self-inflicted wounds that scandal, greed, malpractice and the odd unforeseen PR disaster have cut deep into the trust that people have for business and their brands – from burgers made of horsemeat to banker’s bonuses. And it is partly because of new levels of scrutiny and influence that connected customers have over a business’ activities. But we are also obsessed by trust because it is a fundamental prerequisite for human beings to be able to interact and exchange and therefore to build societies and economies. Indeed to a certain extent our survival and success has been down to our ability to trust each other. Trust may be fashionable but it’s also eternal.

And the really frustrating thing about Trust is that although every business craves it like methadone addicts at a clinic, few really know how to go about getting it.

Of course there are any number of league tables and rankings of the most and least trusted brands and a brisk trade in consultancy aimed at analysing the behaviours of businesses that that enjoy trust. However, any approach to trust that only seeks to learn from the actions of other brands and businesses, impressive though they may be, seems a little self-referential and rather myopic.

So over the past year I have spent a considerable amount of time thinking about and researching issues of trust. But in doing so have avoided the corporate world and instead sought to learn from people and organisations that have trust building down to a fine art. In particular spending time trying to understand the approach to trust building at the heart of conflict resolution. Most notably this included one our most successful peace mediators Jonathan Powell, Tony Blair’s Chief of Staff and the UK Government’s chief negotiator with the IRA during the Northern Ireland peace process.

The result of these and other conversations as well as both qualitative and quantitative research has been four building block of trust that I think are rather helpful.

But first a change of language is required. In a very real sense the pursuit of trust in and of itself may well be a false endeavour. The truth is that trust is not something that any of us can seek, it is an accolade bestowed on us by others once they feel that they can believe in us, our businesses or our brands. We must stop the hollow obsession with being trusted and start to act in ways that are trustworthy, literally worthy of peoples trust. A simple change of corporate and brand language would go a long way to making a big difference. And these building blocks are designed to help brands do just that – behave in ways that are trustworthy.

It is an article of faith in most approaches to trust building that you do what you say you are going to do, not once but time and time again. Those involved in conflict resolution know that dependability is absolutely central to peace building and that creating a reputation for delivery takes time and a set of carefully choreographed actions. Dependable delivery may never be as sexy or headline grabbing as the handshake or fanfare that greets the peace agreement but it marks the difference between success and failure.

Sadly dependability is seen as rather boring in the world of brands and business, indeed it has become desperately fashionable to want to constantly surprise and delight our customers. But this is not really how Amazon or Visa has built high levels of trust amongst their customers, it’s by doing what they say they are going to do over and over again – faultlessly. At first sight First Direct seems like a surprise and delight brand but in reality it simply honours an expectation of exceptional service in every interaction with the bank – it’s actually astonishingly dependable.

As one of the people we spoke to said “The best brands are like God, unfailing, consistent and always there”.

Many corporate reputation advisers herald transparency as the centrepiece of trust building. The more transparent you are in this era of intense consumer scrutiny, the more trustworthy you will seem – particularly when it comes to corporate governance and the supply chain. But transparency is rather over rated. Honesty is an admirable value but complete openness about the sourcing of your materials or the conditions in your Far-East factories aren’t really what people are looking for and in itself it won’t eradicate problematic headlines or damaging revelations.

Far more powerful and robust is a shared agenda between brand and customer. People want to believe in the brands they use, not to have to run the slide rule over them every time they make a purchase.

In many ways the least trusted brands are simply those that are believed to have an agenda at odds with their customers. Barclays, British Gas, Sky and McDonalds (amongst Britain’s least trusted brands according to Which?) all provide products that people value and depend upon but they fail to make the mark when it comes to being trustworthy. Indeed our qualitative research suggested this may become a significant problem for the digital monoliths like Facebook that are increasingly seen to have an agenda at odds with their users.

People trust those organisations that have a higher goal than simply extracting our cash. So we must stop seeing a purpose built on a shared agenda with our customers as simply part of the marketing armoury and start seeing it as a cornerstone of trust and a fundamental building block of business success.

3)   Reciprocity – to get trust you have to give trust

Trust is a two way street, we trust those that show they trust us. And the magical thing is that most of us are hard wired to want to repay the trust that is placed in us, to prove people right. If you trust me I feel good about myself and then I feel good about you and I want to repay that trust. Trusting others creates a powerful chain reaction.

And yet this basic fact eludes most brands and businesses, it is not simply that they do little to show that they trust their customers but that they often do much to make it clear that they don’t. Barclays, like many Banks, spent years showing its customers that it didn’t trust them through the simple act of attaching all the pens in their branches to little chains. These are not Mont Blancs we are talking about but biros. Today Barclays offers a whole stack of untethered pens for customers to use and if a few go missing, well they are all printed with the Barclays logo and so they go out into the world as little pieces of branded content.

In every business there are examples, great and small of ‘chained pens’ – policies, behaviours, symbols and body language that prove that the organisation doesn’t trust its customers. All of us would do well to think about the things we do and don’t do to show that we trust our people and customers whole-heartedly. And if the bottom line is that you really don’t trust your customers, that’s fine but don’t imagine for a moment that they will ever trust you.

Whenever someone acts against their own short-term interests in favour of ours they show that they are putting a long-term relationship with us first. This is the concept of self sacrifice and one of the reasons Mums are widely regarded as emblems of trust in our society.

This idea has been frequently tested through game theory. These laboratory games usually offer players a deal, that gives them the option of acting selfishly, of cooperating or of punishing the other player for behaviour in previous rounds. If you only play one round of the game the optimum strategy is to act selfishly. However, if any more that one round is played the best strategy is always for the two players to work together, and for each individual to make personal sacrifices in favour of their opponent.

This willingness to sacrifice an advantage or a short term gain in order to build long term relationships is fundamental in established approaches to trust building and our research suggests it is no less powerful in business.

When my eldest son was two, I took him to Clarks on Oxford Street to buy a new pair of shoes. The shop assistant dutifully measured his little feet, looked at his current pair of shoes and suggested that I should come back in six weeks time, as he wasn’t yet ready for a new pair. In that moment Clarks lost a sale that was theirs for the taking but in doing so they showed they were putting the interests of me and my two year old ahead of theirs, guaranteeing business for years to come.

We have most of us been brought up in a businesses culture that insists that we are always closing and yet nothing sends a clearer signal to someone that a brand or business is putting them first than an opportunity for a sale that is deferred.

The sting in the tail

If anything that we have talked about sounds a little scary, logistically problematic or commercially challenging that it perhaps the point, trust building takes risk, it is not for the faint hearted.

Some of the most interesting and rapidly growing businesses of the moment are based on principles that seem to the risk averse to be downright foolhardy. Zappos, the US online shoe retailer has a 365 day returns policy (and four years if you buy your shoes on the 29th February), Air B’n’B is a business built entirely on reciprocal trust between those that invite strangers into their homes and those that go to stay in the homes of others.

So while trust maybe on every brand owner’s lips the question is really whether being trustworthy is really in their hearts. Our research suggests that the road to rebuilding trust requires a set of behaviours that don’t necessarily come easily to the business world, partly because they are simple human traits that are often absent from corporate cultures.

No one says that is easy, in the final analysis people are mightily reticent right now to see most of us in the commercial world as remotely trustworthy.

But the trust of our customers is a goal for which it’s worth fighting tooth and nail.

Here are the presentation charts to accompany this post: