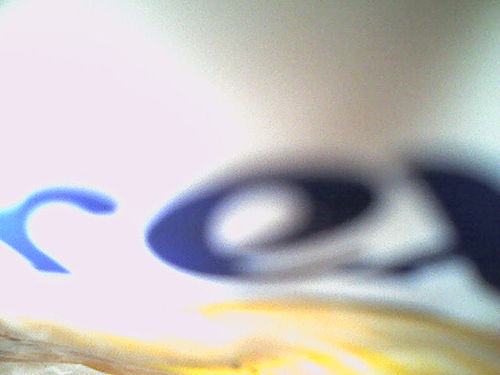 Andrex – part of my life since 1967. Image courtesy of Mezhopking

My father recently bought a new car and almost immediately ran the battery down because he left the hazard warning lights on all night.

Anyway, he was telling me this story when suddenly he said he had sorted the problem by calling the RAC out. He might as well have told me that he was sleeping with a woman that was not my mother.

The RAC! That is not how we were brought up! We were an AA family, always have been, always will be. I was shattered. What next? Swinging? Gun crime? Voting Tory?

The AA is what I call a maternal brand. I was brought up with it and like my other maternal brands I find it familiar and comforting.

And alongside Persil, Fairy Liquid, Andrex, Anchor butter and Heinz tomato ketchup, I choose it without consideration of the alternatives and without substitution.

Having the keys to a brand, that for sufficient numbers of people is a maternal brand, should be a licence to print money.

But these brands are under a new threat beyond the traditional own label foe.

My 39 year relationship with Andrex must have been worth an astronomical amount to Kimberly Clark. I have been using Andrex to wipe my bottom and blow my nose since I came out of nappies.
But it is a relationship that I have recently finished. Finito. No farewell, no tears, no regrets. Presumably Kimberly Clark don’t even know what happened and care even less, because this little parting doesn’t show up on their metrics, at least not yet.
It is just that I felt that I can no longer buy loo roll made from virgin paper and so Andrex has become totally incompatible with the way that we chose to lead our lives as a family.
Brilliant loo roll it may be – soft, strong and very long as its advertising tells us – but it doesn’t care about the things I care about, it doesn’t believe in the stuff I believe in.
My children will not grow up with Andrex as a maternal brand. And all that revenue will slip away from the Kimberly Clark empire.
And I can see the same thing a happening with Anchor butter. I have eaten Anchor since I was weaned sometimes in the late ’60s, never once perturbed by the idea that shipping yellow fats 11,000 miles to the UK might not be a brilliant idea.
But Anchor stands for nothing, believes in nothing, has no point of view about my life or my family’s life. Lurpack does. Thanks to Wiedens Lurpack believes in food – good, honest, natural, tasty food. And it stands against ready meals, lazy food, fast food and junk. That sounds like my brand to be honest because it believes in the something I strongly believe in. Now of course this is a very recent conversion, but I am willing to believe even at this early stage – lets see if their belief is only ‘ad deep’.
Now these may be an utterly isolated examples from a wanker that works in adland and has more money than sense. Perhaps. 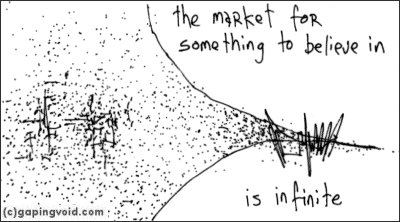 But as Hugh at Gaping Void says “the market for something to believe in is infinite” and the brands that are capturing our imagination and our money at the moment from Innocent to Dove now stand for something you can either actively reject or get fully behind.
I call this this the brand’s ‘position’ after one of the theses in the Cluetrain Manifesto: “Companies attempting to position themselves need to take a position. Optimally it should be relate to something their market actually cares about”.
It would be of little concern to anyone if also ran brands were to fall by the wayside in the face of consumer affection for brands that are aligned to their values, but whatever we think of these maternal brands intellectually, emotionally they matter to us. And their current fragility must be of concern to all of us interested in the brandscape.
I guess by and large maternal brands are the success story of the era of mass marketing. We have very emotional relationships with them because we were brought up on them but perhaps for our parents and grandparents these were simply the brands that were in full distribution, of reasonable quality and marketed strongly, particularly through TV. It’s something Seth Godin calls the TV-Industrial complex – ads buy distribution, buys share, buys profit, buys ads.
And it was watertight for so long because the barriers to entry were so high, because size bred power and because lets face it by the standards of the times the products worked brilliantly.
But I’m afraid that these days I want my brands to be on my side – not just providing a service to me at a reasonable price and with guaranteed results.
I want my brands to care about my life, not just their job.
And if my maternal brands don’t shape up, they will inevitably be shipped out.

20 Replies to “Maternal brands – how deep is the love?”