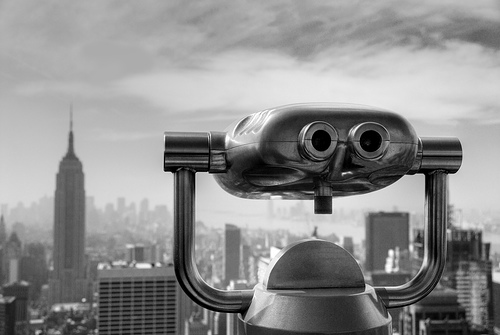 Out of context is viewing online commercially valuable? Image courtesy of papa’rocket.

As we career head long into the economic car crash that is destroying jobs, crushing consumer expenditure and ripping the confidence and profitability out of both client and agency organisations, one performance metric has emerged above all others to guide us through these tricky times.

Right now the advertising industry has become obsessed with this one measure of performance above all others, we even have our own chart at viralvideo.com to add a little competitive frisson between agencies.
Now, it is easy to see why ad people love online views, it is a pure measure of creative prowess. Of course a brilliant seeding strategy can turbo charge online distribution but by and large, unlike traditional media, you can’t buy the audience. Your content has either got what it takes or it hasn’t and that places real value on the thing that agencies value the most and get paid to deliver – creativity.
Of course we have to be realistic about the reach that online viewing can contribute. You have to have something pretty spectacular on your hands like the T-Mobile Dance ad or Cadbury Eyebrows spot to generate the big numbers that make online a serious contender as a distrbution medium. However, the counter argument is the value of an audience that elects to view a commercial message rather than one that is served it regardless of whether they are remotely interested or paying any attention whatsoever.
As a legendary house ad from the ad agency HHCL read while showing a couple going at it hammer and tongs on the sofa oblivious to the TV playing in the foreground, ‘research says these people are watching your ad, who is really getting screwed?’ It seems self evidently true that one voluntary and attentive viewing of a commercial is worth considerably more to the advertiser than the many potential views that a commercial break may or may not have delivered.
Now, not that I want to rain on the online viewing parade but I do want to encourage a moment of caution before we all drink the YouTube Koolaid. Caution inspired by the idea that it’s not only content that is king, context has a pretty good claim to the throne too.
When people watch an ad on the television it is delivered to them in a commercial break. A break in the content that is overtly signposted as an opportunity for people to sell their goods and services and understood as such. The audience has been conditioned to decode the content they then see as ads and that their job is to figure out what is for sale and who is selling it. No matter how eyewateringly creative or side splittingly enjoyable the work, this is clearly understood as a commercial transaction between advertiser and audience. And though it’s hard to quantify exactly, it is clear that this context adds considerably to the success of the content.
And that’s what concerns me about the hoopla around online viewing. Is an ad an ad when it’s viewed out of the context of an ad break? Or does it simply become a piece of sponsored content, engaging and enjoyable but neutered of its commercial power and therefore of dubious valuable to the Client’s business and a rather inappropriate a metric to be fixated on at this particularly mercenary time in the economic cycle.
Hat tip to Paul Colman who got me onto this and is undertaking some proper research on the subject as we speak.

15 Replies to “Context is king”