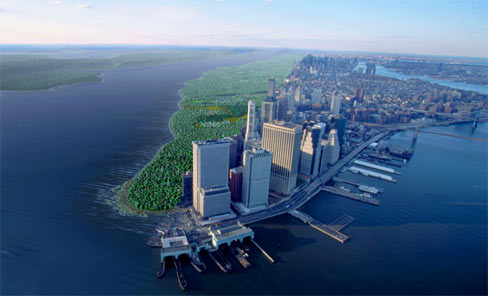 Manhattan on the 12th September 1609 and today. Image courtesy of Traceybrown914

Last but not least the best from the final morning session.

Eric Sanderson – Landscape Biologist – Eric has been working on the Mannahatta project which recreates the Manhatten as Henry Hudson would have experienced it on September 12 1609. He has been working back froma British Military map form the War of Independence recreating the ecosystems that existed on Manhatten and then visualizing them in quite extraordinary ways.
Bjarke Ingels – Architect – Nothing earth shattering here but this man is quite clearly an architectural genius. One of his latest projects is the Danish Pavillion at the Shanghai Expo which includes a 1000 bikes people can borrow, a million litres of Danish Water which is been shipped to China and the Little Mermaid. His advice if you are going to the Danish Capital next year looking for the Little Mermaid is don’t bother.
Magnus Larsson – Dune Architect – This was earth shattering. Magnus is working on a ‘wall’ across Africa to prevent desertification. Plans have existed to plant trees across the continent but trees are very vulnerable ot being used for firewood when people are desperate so Magnus’s plan is to solidify a line of dunes by injecting a bacteria into the sand that turns it into sandstone.
Dan Pink – Career Analyst – Dan is frustrated that science has conclusively proved that the use of extrinsic motivators to reward staff (like bonuses) crushes the creativity that most organizations need but that the business world is still obsessed with this approach. Extrinsic motivators work for very simple tasks but narrows peoples’ focus for the problem solving jobs most of us now have. His solution is to develop intrinsic motivators like autonomy, mastery and purpose.
Itay Talgam – Conductor – Bit of a management metaphor this but brilliant. Talgam uses the styles of different conductors to illustrate the need for leaders to direct and inspire, yes, but also to show their enjoyment of the work their people do. Definitely one to look at online when TED uploads the talks.