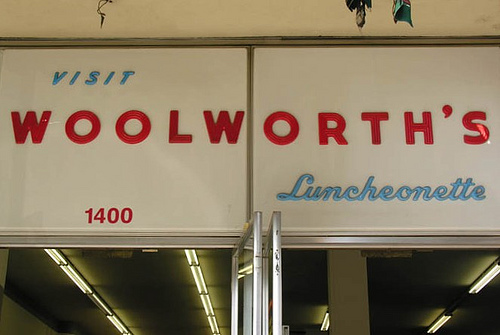 This is the summer of the comeback. Blur are back, Oasis are back, Abba have been approached to take part in a tribute to Wako Jacko and Glastonbury almost saw Crosby, Stills, Nash and Young harmonise with each other once more. And just six months after Woolworths finally threw in the towel and swore never to play live again it too is back, although the performance is entirely online now.

Having bought the brand name from the receivers, Shop Direct has relaunched Woolworths online and declared, through a variety of newer and older media that it is ‘now playing’.
Now I have to admit to being more than a little bit cynical when they first announced they had bought the brand and were going to bring it back. For me Woolworths seemed a retailer that had lost the plot, lost any idea of the role it played in people’s lives and so justly lost the will to live. And its comeback seemed the worst kind of nostalgia marketing, more tribute band than legendary reunion. However, I’m not so sure now, the new Woolworths seems really rather good.
More than that, the launch comes at the perfect time, offering people sunny optimism and the comfort of a well loved brand at a time when people are feeling more than a little pessimistic. They have not only brought Ladybird children’s clothes back, they even sell pick’n’mix on the site, arguably Woolworths signature product.
And in creating an e-commerce only offering Woolworths 2.0 has resolved many of the problems that dogged the 99 year old high street retailer. Not least the effect that selling anything with a bar code on had on peoples understanding of the role of Woolies. This brand is now fairly and squarely about ‘play’ something that was always at the heart of Woolworths but that was monumentally obscured by the industrial-scale fly tipping that characterised their highstreet inventory.
Indeed there must be retail chiefs up and down the land that are green with envy that Woolworths has been able to dump their undifferentiated highstreet and out of town stores in favour of an infinitely smaller but more focused and potentially far more profitable online offering. Retail chiefs that know that they don’t have a hope in hell’s chance of following suit unless they crash the business and call in the receivers. Yet another example of how the City mitigates against bold decision-making in British businesses.
So a brand on the cusp of its centenary has been rescued form the dump bin of retail and given a new lease of life. And yet for all of this one can’t help feeling that the real wonder of Woolies has gone and gone forever. The thing that really delighted people, and especially families, about Woolworth’s extensive retail footprint and eclectic inventory was the one thing that online retailing will never be able to deliver, precisely because it has to deliver. The real spirit of Woolworths was instant gratification. Woolies really came into its own when you absolutely had to have it now not in four days time and only then if you wait in for your order to arrive on your doorstep. The real hole left by Woolworths is really the way it acted as an antidote to the need for premediatated parenting.
And spontenity is of course what e-commerce does so badly, unless the product you want can be delivered down the wire. The internet is unsurpassed at arming consumers with information, price comparisons and recommendations, but it remains prehistoric when it comes to actually getting your hands on the stuff, something that remains the enduring USP of the highstreet.

7 Replies to “The summer of the comeback”