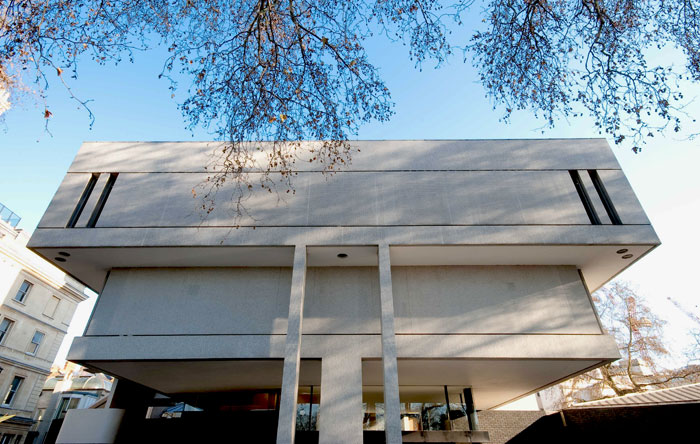 In 1964 the new headquarters of the Royal College of Physicians (RCP) opened its doors, the fifth building the venerable organisation had inhabited since its foundation in 1518. Not only was the location at end one of the Nash Terraces in The Regent’s Park, somewhat of a departure for the College (having previously inhabited buildings in Pall Mall and before that the City) but so was the design.

Fifty years on the building created for the College by Sir Denys Lasdun still has the power to astonish and to shock. While achingly beautiful for those that love modernism and clearly sensitive to its surroundings and the bright stucco of Nash’s wonderful terraces, it has an undeniably striking presence. This is a brilliantly successful building but it is also a wonderfully unique piece of architecture, a spike of modernism amid the Regency splendour of The Regents’s Park.

But the really shocking thing about this building is that the Royal College of Physicians commissioned it. That is what amazes you as you walk around its medicinal garden or through its book lined library or oil painting cad halls. How did an ancient institution, fresh from the clubbable environment of Pall Mall and determined that whatever the style of their new headquarters they were bringing their traditions, rituals, paintings and nick-knacks with them, end up creating one of the greatest modernist buildings in Britain?

Without doubt much must have been to do with the vision and bravery, or perhaps pig-headedness of the RCP. But that they got this building was also down to the nature of the brief. Or rather the way that Sir Denys took the brief and worked with the client.

Lasdun clearly set out to give his clients the most astonishing building, one that worked superbly for them, made a powerful statement about both the heritage of the RCP but its also relevance to modern Britain. But he didn’t set out to give them what they wanted, what they were comfortable with or that felt familiar.

Indeed that is the secret of the building’s success. Sir Denys never once asked the client “what do you want?” but only “what do you do?” By focusing on the latter he gave priority to the way the building needed to work, especially the rituals and traditions of the Royal College and ensured that while these were met the result was not a ‘classical’ structure nor a ‘homage’ to Nash but something quite extraordinary.

We would do well to think about Sir Denys when we take briefs and present solutions. Nothing of greatness ever came from asking a client what advertising they want. Where we create real value and make a real difference is to fixate on what a client needs advertising to do and then set about to deliver this with ruthless boldness and clarity of vision.

Then like the Royal college of Physicians, our clients and brands will get what they deserve and not simply what they want.