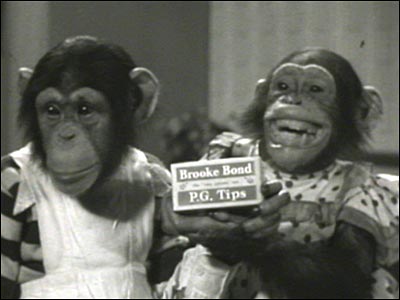 Those cheeky PG chimps
The Advocate is usually dedicated to advocating the merits of an advertising campaign in an attempt to prove that the work that we love and instinctively believe in actually works.
I’m plain out of this stuff at the moment – not much is floating my boat this January – so I thought we might have a think about PG Tips and their revival of the ITV Digital Monkey instead.

Richard Dawkins (for it is he) makes a distinction between temporary agnosticism in practice (TAP) where you remain agnostic because you don’t have enough information to make a decision and permanent agnosticism in principle (PAP) in which no amount of information will cause you to come off the fence.
When it comes to PG tips (the second largest UK tea brand after Tetley)I am an agnostic but agnostic in practice not principle.
PG Tips has an outstanding communications legacy in the UK, running one of the longest lasting advertising campaigns in history – the PG Tips Chimps. The campaign launched in 1956 and holds the record for the ad shown the most times on British television (Mr Shifter).

Chimps ad, sadly with no sound – but you get the idea
Rightly or wrongly, as so many brand owners seems to do, they ditched their primate icons in 2002. While this seems a classic case of crass advertising patricide, we can all appreciate that making real chimps behave in an anthropomophic fashion doesn’t really chime with contemporary ideas of animal welfare and made the brand look a little out of touch.
So they made a ghastly new campaign with claymation pidgeons and then called a pitch – that’s the way it goes in advertising ladies and Gentlemen. Fortunately there is little evidence on You Tube of this work but you can get a feel for it here.
Then along come Mother who have been desperate to find a use for the ITV Digital Monkey since the people that paid for his birth collapsed into finanacial ruin at in the early part of the decade.

ITV Digital launch ad
I guess Mother kinda went ‘You know, monkeys and chimps, get it!’ and bobs’s your uncle PG Tips had a new ad campaign that has half a chance of gaining some traction out there.
My agnosticism is because I can’t work out whether this is genius or sheer folly.
On the one hand this work will be noticed and talked about. Advertising awareness scores will go up (and maybe even brand awareness)and some of the likeability of the advertising will map onto perceptions of the brand. After all this is an ad that showcases both outstanding writing and acting and is that rare thing at the moment – a genuinely enjoyable piece of communication that is welcomed into our homes. Not to mention that I sort of buy the chimps and monkeys thing as a moderate homage to a glorious past.
On the other this smacks of a brand with a once proud communications legacy that, post claymation pidgeons, has completely lost its confidence, content to grovel on the floor of the advertising world for any scraps it can pick up in a desperate attempt to be noticed. These will never be the PG tips ads, they are the ITV Digital Monkey ads that PG Tips are using for a while and as such suffer from all the attendent problems of borrowed interest like misattribution and a difficulty in converting advertising appeal into effect. More seriously I find it distressing that a brand with such stature in its market has nothing to say to us about itself or the wider world beyond a rather weak and generic injunction to ‘put the kettle on’.
Is this genius or folly?
Will they sell some tea?
Is this the platform to take back the number one position from Tetley?
You decide.

15 Replies to “The advocate – January”