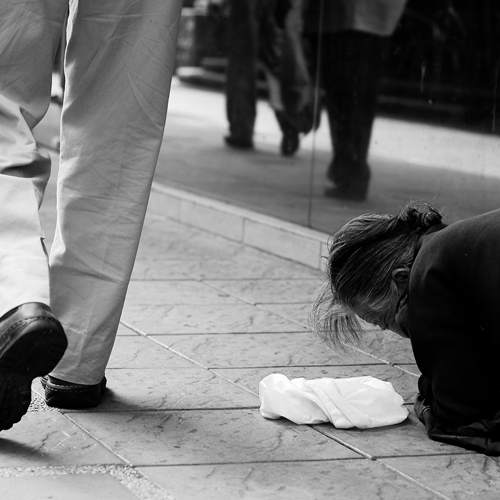 For those that know me personally, the idea that I have been thinking a bit about empathy may come as a bit of an out of character departure.

The journey began when, dutifully in search of weird shit, one of the planners that works with me paid a visit to the amazing and most timely School of Life round our way. She brought back for me Empathy by Roman Krznaric. Goodness knows why – maybe she sees monumentally hidden depths in my character.
Roman Krznaric is the expert in empathy at the School of Life and he rather takes issue with the established notion of empathy as the ability to feel other people’s experiences. Rather he sees it as the ability to see the world through other people’s eyes and something that is in short supply. As Barak Obama is quoted as saying on the back cover, “we seem to be suffering empathy deficit – our ability to put ourselves in someone else’s shoes”. This might be considered bad news at any time however it is a much more pressing problem in an increasingly globalised world, where we have enormous amounts of contact with and are utterly dependent on people who see the world in a different way to us. For Kraznic, where the twentieth Century was a Century of introspection (Birth of psychoanalysis and self help), the 21st must be the Century of outrospection, one in which we attempt to more fully understand each other.
There are few more ready examples of what we are talking about than what is happening in Gaza, which is surely the most appallingly sad example of the absolute absence of any empathy on either side, the loss of which diminishes the humanity of all those involved.
But back to marketing!
I want to warm to a theme that we too suffer from a deficit of empathy in the way we relate to those we seek to influence. We may try to understand their lives but we never really try to see the world through their eyes. That’s partly because we are constantly trying to lump people together so that their incredibly disparate lives become more manageable for us. And when we aren’t doing that we are dividing them into horrifying segments and then, even worse, writing ghastly pen portraits about our imaginary lives.
Steve Henry used to demand that planners write briefs in such a way that he would end up loving and respecting the intended audience. Well that’s a start, but if revelation becomes our watch word for the insight in a strategy could we commit ourselves to real empathy in the way we think and talk about people?
I think this would involve a number of things.
We might bin the target audience bit on a brief.
We would have a section about the revelation – whether its about people’s lives, the brand, the category or the wider world. This wouldn’t waffle on about the audience it would get straight to the point about the astonishing disclosure at the heart of the brief
We would then perhaps have a collection of real and individual stories about people who are from the group we are seeking to influence. These would be real accounts of real people’s lives.
And to get those stories we would need a new approach to engaging with people directly and without fear. A post-research approach.
And I know that those from a research tradition always get annoyed when I say things like that. But the use of research is not going to go away it is simply losing its potency. And perhaps as a community you need to start to think about the longevity of qualitative research and a life beyond it. I’m now going to keep a score of the qual’ research debriefs I attend that contain a revelation and those the merely contain important information – necessary but not sufficient.
Krznaric suggests there are three ways to improve your powers of empathy. They may be a good start on our journey to a more empathetic relationship with people.
First he advocates empathy through learning. Building understanding through immersing yourself in the accounts of other people’s lives most especially from books (particularly autobiography) and film. Nothing much to argue with there.
Second he advocates empathy through conversation. This is more of a challenge for us Brits and it’s the about engaging others in proper conversation in order to more readily understand them. Turning strangers that we stereotype into people who we see as individuals. Theodore Zeldin has set up an online project with this aim in mind called the Oxford Muse. Here he is collecting written portraits of people from all over the world to better understand their lives and also facilitates conversation dinners where complete strangers meet and talk about the contents of the conversation menu. For a taster visit the ite and read the portrait of Alan Human a paranoid schitzophrenic who lives in Oxford on the ‘loony scene’. Another thought is to strike up a meaningful conversation with a complete stranger everyday – something that strikes fear into my own heart.
Thirdly he advocates empathy through experience. This is of course the daddy, going to actually experience the lives of others. My great hero George Orwell did exactly this when writing books like Down and out in Paris and London and the road to Wigan Pier. And If you do nothing else read the chapter in Wigan Pier called Down the Mine – that’s real empathy at work. Maybe we should be spending less time dropping in on people in the living rooms of recruiters and more time having dinner with them, taking their kids to school with them and generally just hanging out.
So that’s the plan then. More revelation in the insight department and more empathy in the target audience department and in the words of Blackadder ‘we will all be in Berlin by tea time’.

29 Replies to “Overcoming our empathy deficit”