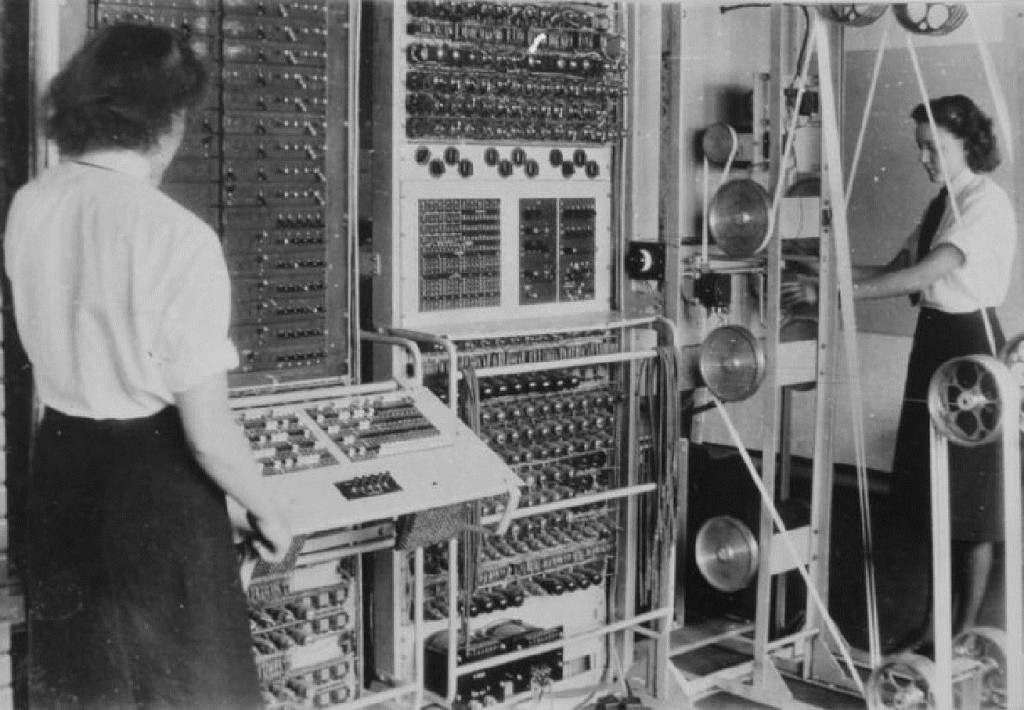 Built from Post Office spare parts, it was operational from February 1944 at Bletchley Park, the British Government’s code breaking headquarters.

Colossus followed on from the work that Alan Turing had done decoding the signals encrypted by the German Enigma machines.

It was essential to the latter stages of the war in helping the Allies understand radio traffic between German High Command and their army divisions in the field.  It’s one of the reasons that the Allies knew the location of 58 of the 60 German divisions in Normandy on the eve of D-Day.

Powerful though Colossus was it required a host of human beings to decipher the material being produced by this breakthrough.

These people, or cryptanalysts, worked in two sections. Section One under a chap called Professor Max Newman  (known as the Newmanry) worked with the various machines including Colossus to mathematically reduce the vast probabilities to more manageable proportions.

Section Two under Major Ralph Tester (the Testery) then attempted to decode the signals by sheer intellectual graft, ingenuity and mind-boggling amounts of patience.

Newman’s team were mathematicians working with pure mathematical probabilities that a series of characters might represent a German word or words. Tester’s team were a mixture of military personnel and civilians working on experience, instinct and intellect to ‘figure out’ what the Germans might be trying to say.

The data was immensely powerful and the mathematicians essential in allowing Bletchley to get close to cracking German codes. However the final leg was done by people chewing endless pencil ends and wrestling hour after hour trying to force their brains to be more instinctive and intuitive.

Roy Jenkins (British Home Secretary in the late 1960s and Testery cryptanalyst) is quoted by his biographer, John Campbell, as writing “We tried extremely hard feeling it was the least that we could do as we sat there in safety while the assault on the European mainland was launched and V-1s and V-2s descended on London. And trying hard meant straining to get the last ounce of convoluted ingenuity out of one’s brain, rather like a gymnast who tries to bend his bones into positions more unnatural than he had ever achieved before”.

As the marketing business learns to welcome the mathematicians lets hope there is still a place for people that can perform the mental gymnastics that we really need to break the codes locked inside the data and create new futures for brands. People whose brains are more instinctive and intuitive than simply logical and deductive.

4 Replies to “Maths and magic – the secret of Bletchley”