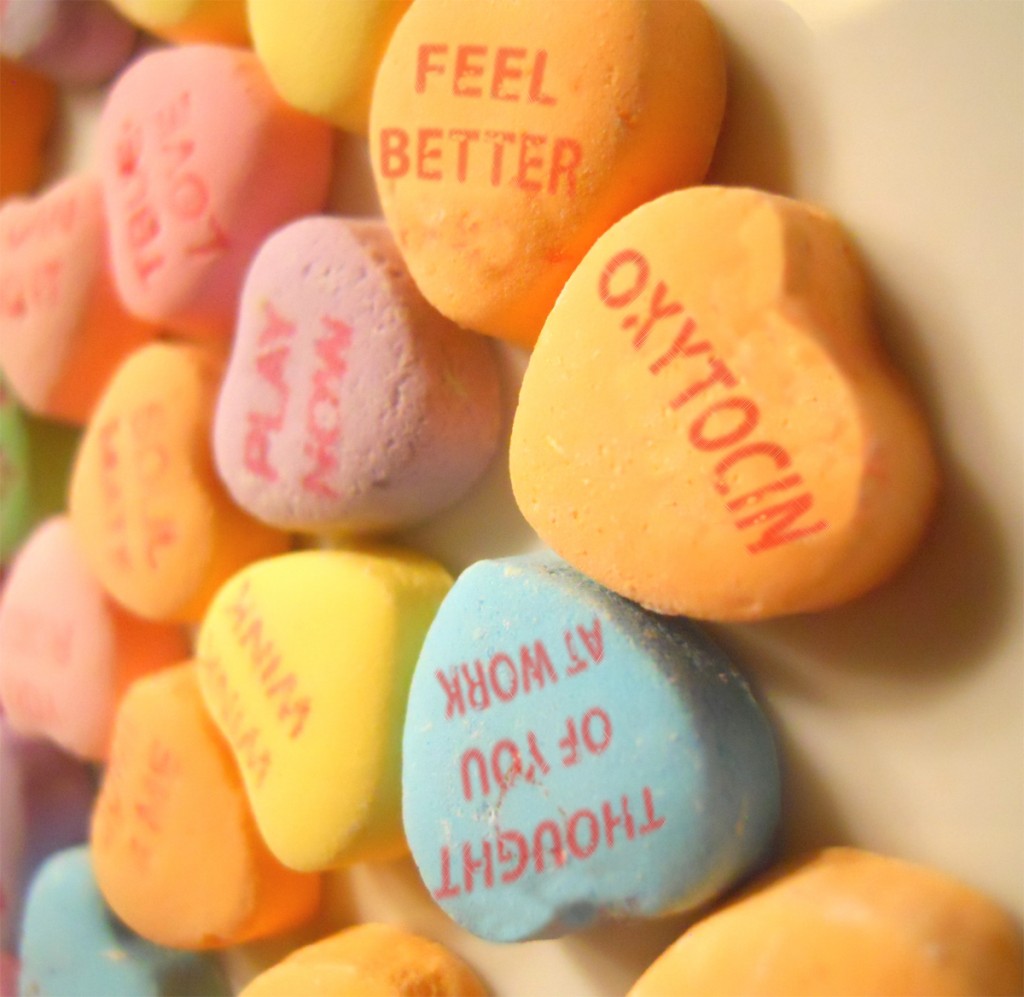 Chances are that you will be familiar with the properties of oxytocin.

Whether male or female you will have enjoyed the sense of warmth it creates just after orgasm, if you are a mum you will probably have experienced its effects during childbirth (indeed its name comes from the Greek ōkytokínē meaning ‘quick birth’) and if have breast fed your children you definitely will have enjoyed a rush of oxytocin – it facilitates the letting down of milk. The mammal hormone oxytocin is released on all of these occasions and while is has a number of useful physical properties, emotionally it acts to create trust and a sense of deep and intimate bonding. And pretty much that’s what we knew about the stuff until recently. Thanks to the work of Paul Zak we are beginning to understand that, while oxytocin is in abundance in all of these activities, it has a far more profound and everyday role in our lives – creating empathy and trust. So much so that Zak has styled it the moral molecule, the chemical that makes us good.

Calling himself Dr Love, Zak greets everyone he meets with a powerful and heartfelt hug. This, he explains, is to release oxytocin in both parties and create both a mutual bond and a sense of wellbeing. In fact as Dr Love, Zak prescribes at least eight hugs a day for our general well being and happiness. But it’s not just physical proximity and contact that causes the molecule to be released into the blood, this can be done by emotional proximity too. In a now famous experiment he attended a friend’s wedding with a very large amount of blood testing equipment and measured the levels of oxytocin in the bridal party and guests both before and immediately after the service. Not only was there a significant oxytocin spike in the bride’s blood but also in family of the bride and the guests too. Clearly the emotion of the event was capable of triggering a release in oxytocin that in turn created a stronger bond between the participants.

Zak describes a cycle of events. An action or event creates empathy that causes the release of oxytocin which in its turn increases the levels of trust leading to further empathy building behaviour. In other words there is a virtuous circle of virtue.

While the concept of a molecule that governs morality is worthy of attention in and of itself my particular interest is in its effects on behaviour towards brands and the way advertising might work. And in particular the way that emotion in advertising and other brand activities might be powerful. Most of us instinctively believe that emotional persuasion is more potent than rational persuasion but let’s face it we don’t have the slightest idea about why this might be. The more pretentious of us prattle on about neuroscience but since the neuroscientists still have little real idea about how the brain works it seems rather far fetched that anyone in the advertising business might.

So, enter stage right oxytocin and perhaps a far more simple explanation – that some brand activities including advertising may be capable of stimulating the release of oxytocin and thus create a bond between people and the authors of that activity – brands

So far experimental research has primarily looked at the effect of artificially administered oxytocin. Here of course I am using research in the proper sense of the word with double blinds, controls and placebos rather than the nonsense that quantitative and qualitative agencies pedal as research.  Zak et al have already shown that giving oxytocin to people who are then exposed to fundraising advertising increases the average donation made by research participants in comparison with those administered a placebo. While this is interesting and may have implications for the context in which advertising is consumed – in that a context that leads to a prior release of oxytocin may improve the emotional potency of ad ad – no one has yet looked at the opposite effect. That is whether an ad itself can trigger a rush of oxytocin that in turn builds affinity with the brand itself and influences purchase behaviour – this can be hypothesised, with ads like our own Welcome Home for T-Mobile perhaps carrying a number of powerful oxytocin triggers but it’s not yet proven.

If we could prove this, that some brand activities trigger oxytocin release and this is profound enough and long lasting enough to map onto brand behaviour then we might at last have an answer to why reason leads to conclusion but emotion leads to action. Not only would that would be a genuine step forward in our understanding of how advertising works but also a challenge to the world of ‘sciency marketing’ that is increasingly on the march.

8 Replies to “Does oxytocin hold the answer?”