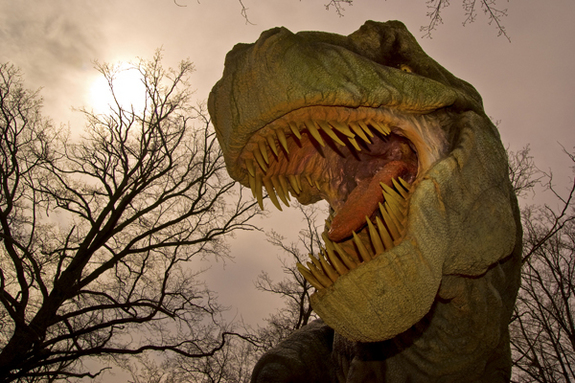 The greatest insult you can throw at someone in this industry is that they are a dinosaur.

Being a dinosaur not only implies that you are slow and stupid but also that you are in imminent danger of being wiped out by an asteroid or similar calamity and not before time.

That’s the narrative of the new marketing charlatans that sit around perpetrating click fraud, obsessing about dubious metrics like engagement and desperately waiting for the asteroids to come do their work.

But it’s high time we resurrected the term ‘dinosaur’ as a term of respect. At a recent Firestarters gig Dave Trott, one of the clearest thinkers in our business and still one of our greatest writers hit back on behalf of us dinosaurs. He pointed out that if you “put a dinosaur in a field of sheep, the dinosaur fucking wins”. The dinosaur is bigger, more powerful, thinks for itself and rips the throats out of the sheep that are just following each other and bleating about the latest marketing fad they have read about.

Thanks to Dave I’m now proud to say I am a dinosaur and I’m proud that I do dinosaur planning. That’s planning that still believes in two fundamental things.

Firstly it holds that we are here to change the fame and fortunes of brands and not simply improve their lot. Yes I know that a lot of what we do on a day to day basis is on pursuit of incremental improvement but that’s not where we create real value. Real value comes from solving the real commercial problems facing a brand in fundamental and disruptive ways. This takes a mindset that favours effectiveness not efficiency and one that is able to change the rules in a category if the rules don’t favour your brand.

Secondly it believes that we are not just grand strategists but also have to inspire and nurture great work. Work that is capable of and allowed to have, an impact on people and on the market. No amount of clever thinking is worth much if the work that results is ignored by those it seeks to talk to. This takes a sensibility that enjoys working with the work and delights at the creative process whatever the output we are delivering.

Dinosaur planning is both the past of our discipline – it is how most of the greatest planners in our industry worked – and the future since it’s only through this approach that we can offer sustained value to our agencies and clients.

And contrary to popular belief the Dinosaurs weren’t wiped out, they became birds. And leave an eagle in a field of sheep and I reckon you get the same result.

3 Replies to “In praise of Dinosaur planning”